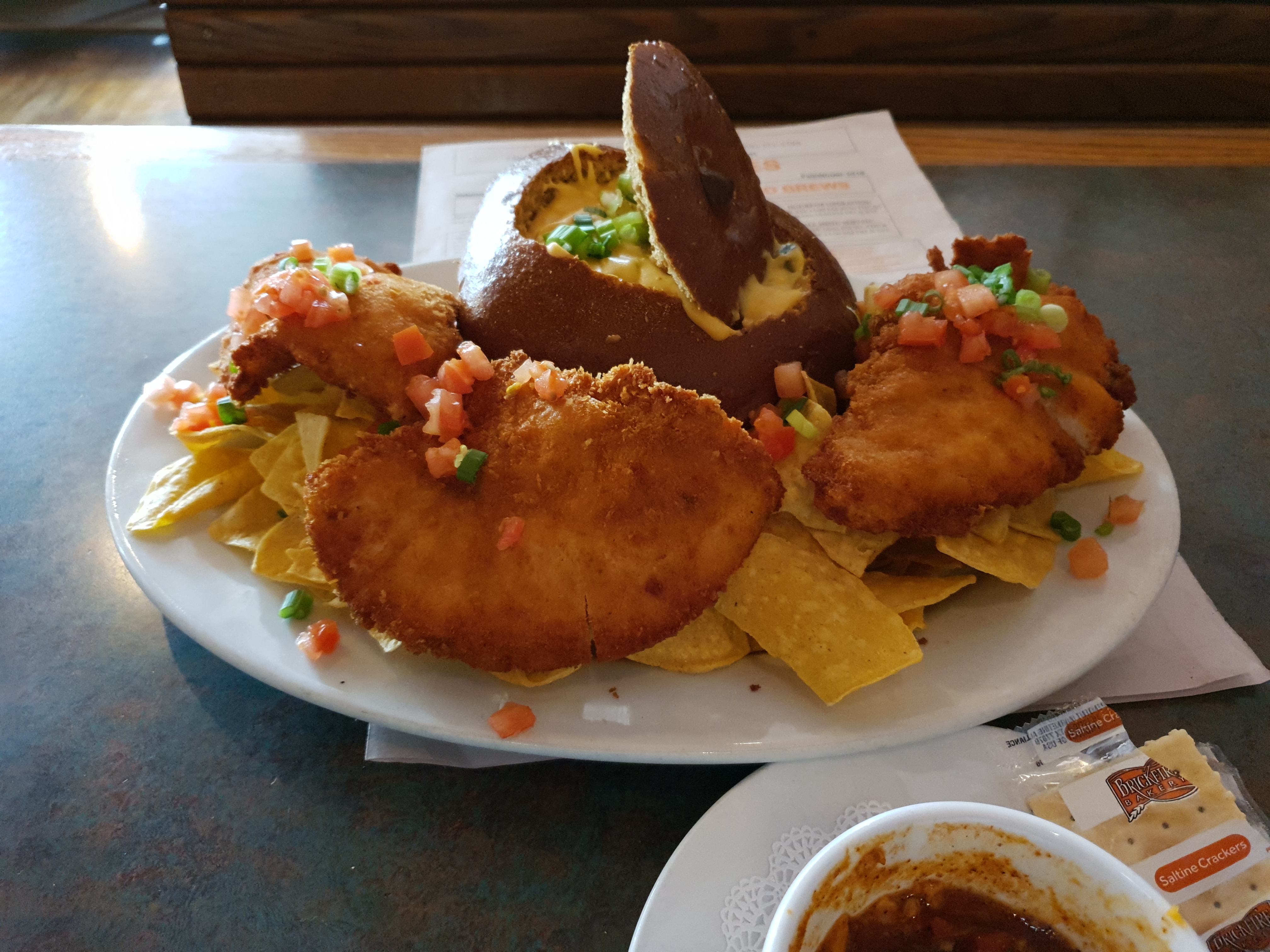 I don’t think Prescott could be accused of being a foodie hotspot or a gourmet’s paradise. But you know what? You get good, honest food there, the drinks are strong (and cheap) and the atmosphere is fun and lively.

For those interested in the food, here’s a bit of a rundown. My first day in Prescott, I happened across a cute little bakery below street level, Grama’s Bakery. I wandered in and found a Bear Claw which I’d heard about but never tried. It was the most wonderful, flaky treat!!

At Palace Restaurant & Saloon (touted as Arizona’s oldest bar), I moseyed in and ordered an Old Fashioned and the damn thing nearly knocked me on my butt!! I didn’t know that at altitude (5,300ft here), alcohol affects you more significantly. Mind you, I also had an empty stomach. And how about those drink prices? $6? OMG!! At home in Brisbane, I pay anywhere from $16-$22 for the same drink and it’s much weaker too.

I had a late lunch of incredible Arizona Artichoke Hearts, breaded, fried and served with spicy chipotle aioli, followed by a great Rough Rider’s Ribeye steak. You get so many different sides with a meal in the US and for this one, it was ‘market vegetables’ (green beans), a loaded baked potato ‘with all the fixins’, plus a Caesar salad, plus fresh baked bread! Dessert was the aforementioned Bear Claw, which I took back and devoured in my hotel room.

Breakfast at Days Inn at Wyndham

Next day, breakfast started at the hotel and was a complimentary selection of scrambled eggs, sausages, fruits, pastries, juices, coffee, yoghurt, toast, pancakes and waffles. It was my first try of string cheese … man, that stuff is diabolical!! It surely can’t be considered food!

Lunch on my second day was at Prescott Brewing Company. My eyes were way too big for my belly but I was intrigued by the “PBC Fondue: Our crispy breaded chicken tenders served with a fresh baked bread boule filled with our jalapeno beer cheese sauce, surrounded by corn tortilla chips and topped with diced tomatoes and green onions.” And what a tour de force it was!! I mean, I’d already ordered an appetiser of a little cup of chilli but seriously, that was a drop in the ocean compared to this dish, which, in hindsight, was on the ‘Shareables’ menu. When it arrived in all its golden glory, some Canadians arriving at the next table looked at it in awe and asked “Is that all for you?” Haha!! Why yes, yes it was, but suffice to say that I could only get through about half of it and the Canadians were happy to relieve me of the remainder. It was a great icebreaker actually! The chicken and the ‘fondue’ were amazing!! And the crispy tortilla chips added a nice crunch.

A couple of hours later, after cruising the souvenir shops and absorbing Prescott’s wintry, relaxed atmosphere, I wandered into the city’s ‘Treat Center’ on Courthouse Square. It’s an old-style candy store filled with American lollies, chocolates and candies of all kinds. There’s also an ice cream parlour at the back of the store and a beautiful old man served me. I asked for a sundae and he was so sweet. He microwaved the fudge sauce and was keen to tell me that he didn’t warm it too much or it might burn me. He melted my heart. I sat outside where some locals were discussing politics and just listened in as I managed to fit in about half of my cherry and chocolate ice cream sundae.

For dinner, I went to Rosa’s Pizzeria which was a recommendation from some old gentlemen I met that day in McDonald’s where I’d gone to use the WiFi. It was packed but fortunately, I was a solo diner so I was seated right away. The food was superb! I had the Baked Ziti (SO good!!) and only wanted a slice of Margherita pizza but at night, you can only get the whole thing. Here too, I met a lovely couple sitting next to me and handed over the three quarters I couldn’t eat. For dessert, I had sublime Tiramisu.

After dinner, I wandered over to Palace Saloon again for another Old Fashioned and to listen to the live band. Thoroughly enjoyed every minute of it!