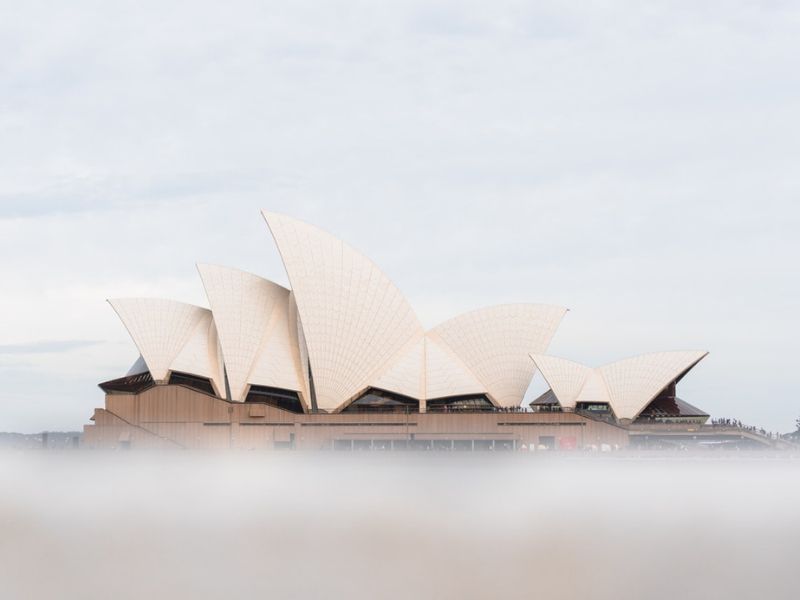 I went to Sydney last week. I go every two or three years to visit friends and when I have client meetings for my business. I don’t tend to do any touristy sightseeing but when I travel anywhere, I like to observe the regular and the usual. It’s interesting to compare your own city with one you don’t live in. Here are ten things you may be interested to know about Sydney.

Well they’re kind of tri-level, to be precise. You walk in from the platform and you can sit there or you can go up or down the stairs to the other two levels. Sydney’s trains are pretty clean, air-conditioned and well maintained.

2. You can climb the famous Sydney Harbour Bridge

From AUD $168, you can slip on a pair of very unattractive overalls, tether yourself to the Sydney Harbour Bridge and climb all the way to the top! You certainly won’t be thinking about the drab grey attire you’re wearing when you’re 134 metres above the harbour! It takes three and a half hours to go right to the top and back and you can do a ‘sampler climb’ to the halfway point if you want but if you’re going that far, wouldn’t you go all the way?

Cool fact: Before he became famous, Paul Hogan aka Crocodile Dundee was employed as a full-time painter on the bridge. It was a never-ending task because as soon as it was painted, it was time to start all over again.

3. Sydney’s New Year’s Eve fireworks are the most watched in the world

More than a billion viewers across the globe tune in to the Sydney New Year’s Eve fireworks spectacular every year. On the ground in Sydney itself, 1.6 million people gather to watch them in person which is more than the number that assemble in New York (1 million)! Because of the event’s popularity, no expense is spared as it becomes one of the city’s most important tourism marketing activities. The fireworks cost more than $7 million each year but the return on investment is about $156 million … that’s serious BANG for buck, in more ways than one!

It’s also very cool that Sydney reaches midnight on December 31 many hours before its northern hemisphere friends. It’s safe to say that the Harbour City puts on such an incredible show that it puts the rest of the world in the mood for a rockin’ end of year celebration.

4. The bronze medals at the Sydney Olympics used to be currency

Australia phased out 1-cent and 2-cent coins in 1990 when it was deemed that the cost of minting them was greater than the face value of the coins. Bronze had become prohibitively expensive. In time for the 2000 Sydney Olympics, the coins were melted down and turned into the bronze medals awarded to athletes.

5. Sydney’s cockatoos are moving to the city

In the southern suburbs where I was visiting, I noticed a lot of sulphur-crested cockatoos in the neighbourhood. They’re gorgeous and their sound is quite iconic but they’re becoming a bit of a pest for locals. A recent survey reported that cockatoos are the fifth most commonly reported bird species in Sydney.

The ‘cockies’ are smart! They’re adapting to urban life and learning ways of opening rubbish bins and even windows, whatever it takes to scavenge the food they’re after. But a word of warning: don’t try to touch or hand feed a cockatoo in the wild as they can bite and they may carry beak and feather disease.

6. There’s Uber in Sydney but you might want to take a taxi

My Uber ride to the train station to take me to the airport took 5 minutes and covered a distance of 1.04 kilometres. The cost was $20.28 plus $1.75 for ‘Tolls, Surcharges and Fees’!! Didn’t travel via any toll ways, it wasn’t a public holiday and fees, well doesn’t the $20.28 cover ‘fees’? I hadn’t noticed any Uber surge on the app so I’m at a loss as to why the fare was so freakin’ high! Uber didn’t want to know about it. It seems every time I use Uber or Uber Eats these days, there’s always an issue. On my way to the airport in Brisbane to head to Sydney, the Uber I’d pre-arranged the night before cancelled my trip before I even got to the street, costing me an $8 cancellation fee. As I live on a high floor in a high-rise apartment and had to wait for the elevator, it does take a couple of minutes to get down to street level. Note, the $10.00 credit on the receipt was for a previous issue they’d had to resolve.

So what’s an Uber rant doing on a page about Sydney? Oh that’s right, I meant to say, don’t try to catch a taxi at shift change-over which happens twice a day at 2am and 2pm.

Major cities around the world are implementing smart ticketing systems. In Sydney, it’s the Opal card and you can use it to travel on buses, ferries, trains and light rail services. If you’re only going to use the public transport system once or twice, then just pick up an Opal single trip ticket. For higher usage, the smartcard option is more economical and convenient.

8. Tipping is not required in Sydney

When I was in the US, I found the tipping culture difficult. Because it’s not expected here in Australia, it can feel awkward visiting a place where it is because you never know what’s appropriate or how, who or when to tip. Tipping is not customary in Sydney but with its high tourist population, it’s quite common. Feel free to tip if you enjoyed an experience or received great service, but it’s not obligatory.

9. You can use the bathrooms in Sydney for free

Another thing I noticed in the US is that you sometimes can’t use the bathrooms in a cafe, bar or restaurant unless you purchase something. Then the PIN code for the bathroom door will be at the bottom of the receipt. That said, you may have to ask for the key because sometimes the bathrooms aren’t in the actual business itself, but in the common area of the building. Usually, you won’t have too much trouble getting the key just by asking.

10. Sydney is a sprawling city and traffic is terrible

Not a complaint but a genuine observation. Sydney is Australia’s largest city by population and the city is so spread out, there are talks of dividing it into three separate cities. Meanwhile, Sydneysiders are accustomed to spending an hour or more in traffic on each trip to and from work every day. The city runs on its cars the way Los Angeles does and Sydney’s average commute time is more than 35 minutes, the longest in Australia. Even New York’s average commute is shorter than that. A 20-kilometre drive in Sydney could take an hour or longer.

Sydney is an impressive city to visit. It’s spectacular from the air as you come in to land at the airport and no doubt, it’s dazzling from the deck of one of the many cruise liners that dock there.